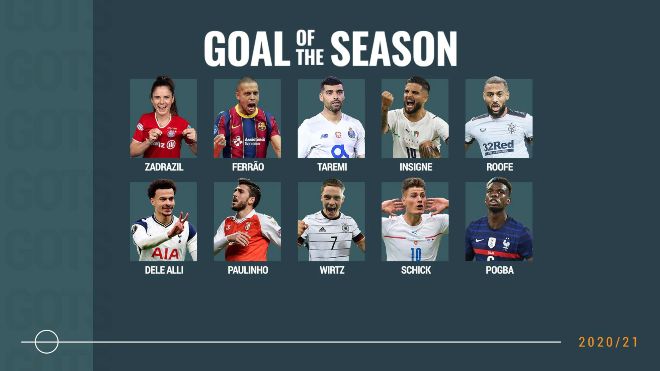 UEFA has announced its shortlist for the 2020/21 goal of the season award. The nominees include some absolutely scintillating goals from the 2020/21 season along with the recently conducted UEFA Euro 2020.

In each of the previous five campaigns, the goal of the season has been won by Cristiano Ronaldo and Lionel Messi on four occasions. However this time neither of them feature.

The first goal on the list is Paul Pogba’s long-range effort against Switzerland. Although France lost that match, Pogba’s goal is worth remembering. A curling effort from at least 35 yards out straight into the top corner.

Patrik Schick’s goal from the halfway line will go down as one of the best goals ever scored. In the UEFA Euro match against Scotland, Schick having seen the goalkeeper far out tried an outrageous effort and swerved the ball in from midpoint.

Chelsea on their way to Champions League glory conceded just four goals. And one of them was an absolute stunner from Medhi Taremi against Porto. In the dying minutes of the second leg quarterfinals, out of nowhere Taremi produced a bicycle kick to leave Eduoard Mendy stranded.

Amongst female nominees, Sarah Zadrazil’s goal for Bayern Munich against Chelsea in the semifinals of UCLW was nominated. A stunning goal from a half volley.