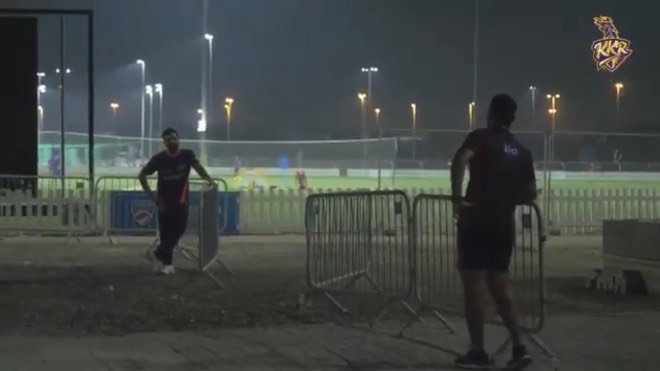 The 13th edition of Indian Premier League (IPL 2020) is starting from September 19 in UAE and all the teams have now also begun their outdoor training session.

Mumbai Indians and Kolkata Knight Riders are practising at the Zayed Cricket Stadium in Abu Dhabi, forming separate bio-bubble. They are also separated at the ground and have separate faculty at the ground. Amid this, the best friends Rohit Sharma and Abhishek Nayar caught up at the stadium on the sidelines of their respective teams’ practice session. It was a meeting of a different kind.

There was no handshake, nor a hug, and no fist bumps. Both maintained a proper safe distance according to the protocols laid out by the BCCI, as they interacted face-to-face after a long.

“Hum log ka idhar takk hai, tum log ka udhar taak hai (We are until here and you guys are until there,)” Nayar told Rohit, pointing to the barricades.

To which Rohit replied, “Ha, udhar nahee aa sakta mein. Idhar khada rehna padega. (Yes, I cannot come there. We have to stand here itself).”

Nayar tried getting a bit closer, but Rohit reminded him about the social distancing by saying: “Iske aage matt aa. Uss taraf reh (Don’t come ahead of this. Stay where you are).”

Rohit Sharma is captaining defending champions Mumbai Indians while Abhishek Nayar is the assistant coach of the Kolkata Knight Riders.