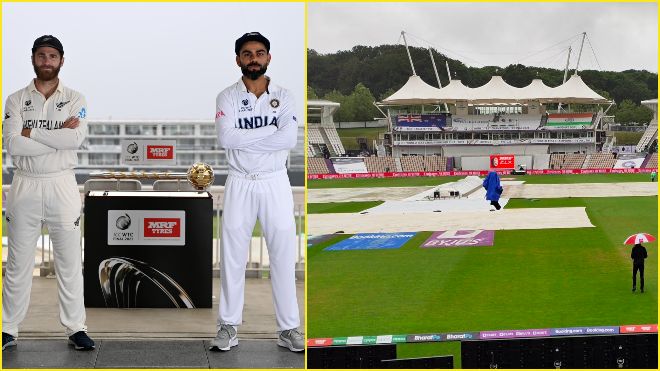 For all the buildup to the grand showpiece event of the ICC World Test Championship Final, the day one was a completely contrary. Once again English conditions played spoilsport as no play was possible.

Not a ball was bowled on the first day of the WTC Final. Firstly the toss was delayed due to rain and no play was possible at the Ageas Bowl in Southampton. Fans will be hoping that day 2 can bring in sunshine and some fantastic cricket.

Board of Cricket Control in India took to Twitter to declare that play on day 1 has been called off due to rain. The ground staff tried their best but were unable to dry out the wet outfield.

“UPDATE – Unfortunately, play on Day 1 has been called off due to rains. 10.30 AM local time start tomorrow,” BCCI tweeted.

On the other hand New Zealand cricket said on Twitter to say that a total of 98 overs will be played out on Saturday. The time for start is scheduled to be at 3pm (IST).

“Day 1 has been called at the Hampshire Bowl. A brief period without rain after lunch but it’s back now and the Match Officials have called things. 98 overs now scheduled for tomorrow with a 10-30am local start. #WTC21,” New Zealand Cricket said their statement.