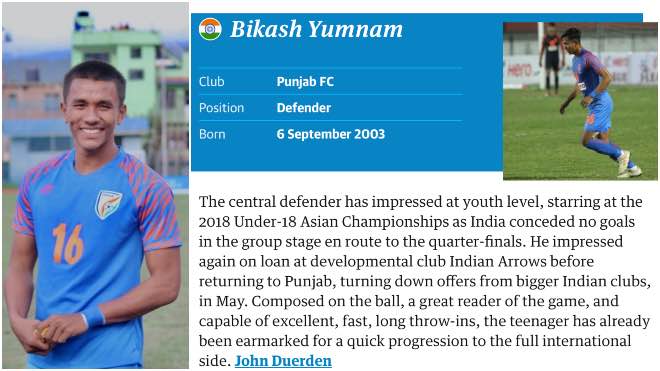 Bikash Yumnam is the first-ever Indian footballer to be included the list of top 60 ‘next generation’ stars by The Guardian this year. It is the first time an Indian has appeared in this list.

The Guardian releases a list of Next Generation player every year since they started this back in 2014. And Bikash Yumnam is the very first Indian in it.

Bikash Yumnam plays in the central defensive position. He began his footballing journey with a positive impact on the youth levels of Indian football. Thus, resulting in getting picked for the Indian football team who played at the 2018 U-16 Asian Championships.

He was one of the crucial members of that squad, the Indian national team didn’t concede any goals against Vietnam, Iran and Indonesia in the Group phase, resulting in India booking a slot into the quarter-finals.

Bikash Yumnam played for Indian Arrows last season on loan from Punjab FC. The appeared 9 times for the All India Football Federation’s (AIFF) development team. The player still has contract with Punjab FC and thus will be seen donning the Punjab FC kit this season and will be looking to book himself a European stint.

Being part of The Guardian’s ‘Next Generation’ list is a big achievement for any player. This also catches the eyes of some of the European team. So, Bikash’s entry into the list turns into a European stint for him when he will be 18 the next season.