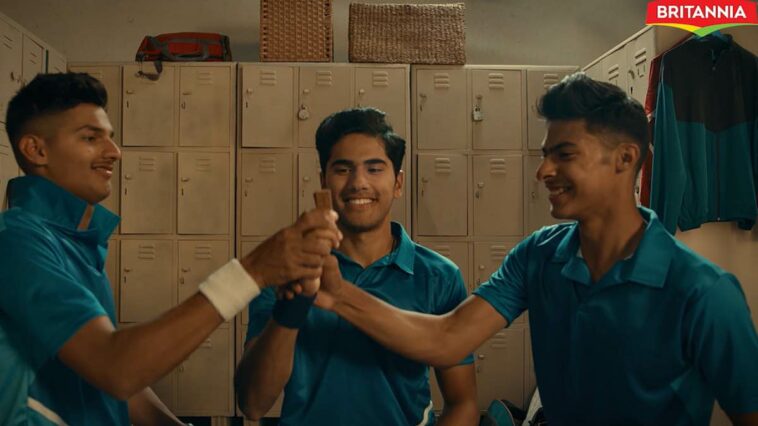 The new TVC, which centres around Britannia Bourbon being the catalyst of fun between real friends, reflects the craving for the original chocolatey snack. With the lasting essence of the U-19 Cricket World Cup, these teenage icons have been roped in to be a part of Bourbon’s latest campaign featuring the close-knit trio, known to be one another’s the confidant on and off the pitch enacting a situation that can be witnessed in all friendly rendezvous.

The campaign is framed on the basic yet universal opinion that Britannia Bourbon is too good to be shared, even with the closest friends, and this is represented through the wickedly smooth tricks that the three champs pull on each other to steal a bite of their favourite chocolaty snack. This snappy campaign also has a fun pre-campaign leg where the three rising stars are seen engaging in cheeky pranks with each other on Instagram. The pre-campaign buzz starts with Harnoor and Raj taking over Yash’s Instagram account and in true BFF style, releasing embarrassing videos of Yash stealing their Britannia Bourbon. Yash then takes back control of his account and gets his payback from his BFF mates by asking consumers to help him find Raj and Harnoor’s hidden Britannia Bourbon stashes. Finally, the three friends come together for fun banter and release the campaign on their Instagram accounts.

The campaign honours the cheeky relationships between real friends and Britannia Bourbon’s role in inciting fun amongst such friends, as a part of the brand’s Original Friendship concept. These friendships are fascinating – candid and enjoyable and these pals like the teenage leads in the TVC will not waste a chance to poke fun at you.

Commenting on the launch of the #BourbonFriendsForever campaign, Amit Doshi, Chief Marketing Officer, Britannia Industries said, “Britannia Bourbon, the original chocolatey biscuit has been a favourite in India and has been a part of multiple friendship stories across generations. Picking up from our last campaign with Indian cricket stars Hardik, Shreyas, and Deepak, we are excited to echo the brand’s purpose of being an enabler of fun between real friends in our new campaign with Indian U19 champions Yash Dhull, Harnoor Singh, and Raj Bawa – the younger BFFs and rising stars of Indian cricket.”