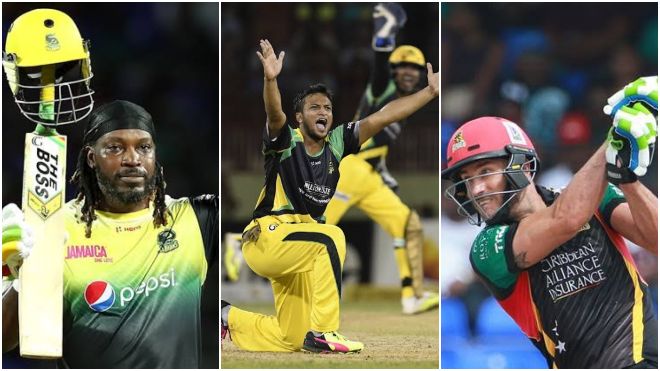 CPL 2021: Gayle returns to CPL and back with Patriots; Shakib back with Tallawahs; Faf du Plessis joins St Lucia Zouks

Chris Gayle, Shakib al Hasan and Faf du Plessis will be playing at the 2021 Caribbean Premier League (CPL 2021) which takes place in St Kitts & Nevis in August and September.

Chris Gayle will be back with St Kitts & Nevis Patriots, a team he played for in 2017 and 2018. Gayle was supposed to join the St Lucia Zouks in CPL 2020 but he eventually opted out of last season for personal reasons. Gayle guided the Patriots to their only Hero CPL final in his first year with the franchise. As the leading run-scorer in T20 history, he brings a huge amount of experience to the Patriots squad.

Gayle played for his home side Jamaica Tallahwahs in the first four seasons of the league before shifting to Patriots and again returning to the Tallahwahs setup in 2019. But he exited the franchise after that season and publicly blamed the coach Ramnaresh Sarwan for it.

Shakib al Hasan has joined the Jamaica Tallawahs for the 2021 season. This will be the second time that the spin-bowling allrounder has represented the Tallawahs having been with the franchise in 2016 and 2017.

Faf du Plessis will be playing for the St Lucia Zouks this season. The former South Africa captain has been in outstanding form in recent months for the Chennai Super Kings at the Indian Premier League (IPL 2021) where he made four consecutive half-centuries, including 95 not out against Kolkata Knight Riders. This is his second stint at the CPL having played for the Patriots in 2016.