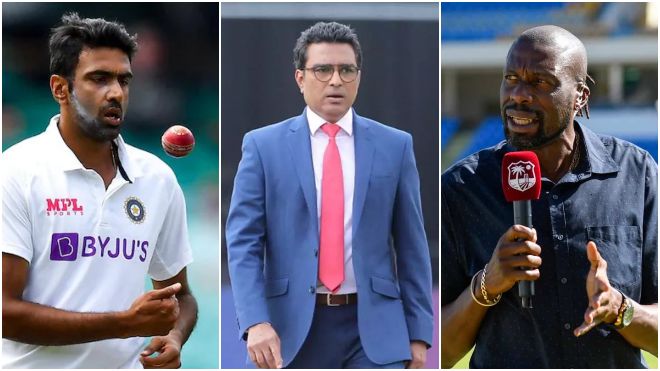 Curtly Ambrose opens up about Sanjay Manjrekar's remarks on Ashwin

Sanjay Manjrekar has once again sparked controversy surrounding his latest remarks over Ravichandran Ashwin. The experienced commentator is widely known for his controversial statements.

This time around Sanjay Manjrekar said that he didn’t consider Ravichandran Ashwin as a cricketing ‘great’. For him to be called amongst the greatest of all time, Ashwin needs to prove more. Manjrekar says that since Ashwin doesn’t a five-wicket haul in SENA (South Africa, England, New Zealand and Australia) countries he can’t be considered in that category.

However now, former West Indian legend Sir Curtly Ambrose has come to speak on this topic. Speaking on his YouTube channel, the Curtly and Karishma show he said that players should be judged after they’ve retired. The fast bowling great emphasised that everyone’s opinions differ and we must respect them. According to him, players should not be measured during their active playing time.

“We all have our different opinions. We all look at greatness in different ways. Sanjay Manjrekar was a wonderful cricketer in his time. He has his opinion of that, we all have our views. But, how do you define greatness? That is a good question,” said Ambrose.

“Because sometimes, to be quite fair, we use the word greatness loosely. So, we have to be careful with how we define greatness. According to me, greatness is when a player can be very consistent over a period of time, for years, not one or two years,” he added.

“Some guys can come into international cricket, and for two or three years, set the world on fire. And, for the next six to seven years, they do nothing. You cannot really judge on the first two or three years. It is over a period of time, through a whole career. At the end of your career, you can be judged if you were great or good or average,” he concluded.