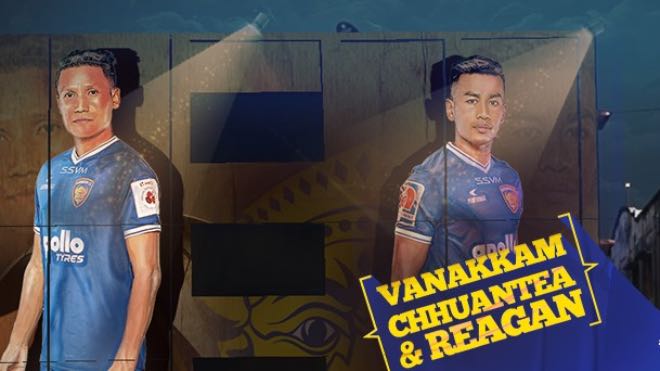 Chennaiyin FC announced the signing of left-back Lalchhuanmawia Fanai and right-back Reagan Singh for the upcoming season of Indian Super League (ISL 2020). 31-year-old Fanai who hails from Mizoram and is better known as ‘Chhuantea’, along with 29-year-old Reagan from Manipur, join the two-time Indian Super League champions on free transfers.

Earlier this week, Chennaiyin FC announced that goalkeeper Karanjit Singh has extended his stay at the club till the end of the 2020-21 season.

“Chhuantea (Fanai) and Reagan (Singh) are important additions to our squad in the key full-back positions. They bring valuable experience of playing in the ISL and will have a vital role to play in our efforts to push for success in the upcoming season. I welcome both of them to the Chennaiyin family, and look forward to working with them,” CFC Head Coach Csaba László said on the duo’s arrival.

“I am delighted to join CFC and am really excited about working with the new coach (Csaba László) and achieving his vision for the club. This will be a unique ISL season and I can’t wait to meet the boys in Goa and get the ball rolling,” said Chhuantea on becoming a part of the CFC family.

“I am very happy to join one of the most successful clubs in the ISL. CFC are a unique team with a great fanbase, and I promise to contribute to the best of my ability in our efforts to bring a third ISL title to Chennai,” said Reagan after signing for Chennaiyin.

Towering left-back Chhuantea made his professional debut for Punjab side JCT in the I-League before playing for Shillong Lajong. He then signed for Bengaluru FC, with whom he won the 2014-15 Federation Cup and 2015-16 I-League. Chhuantea then featured for Mumbai City FC and FC Pune City in the ISL, as both outfits reached the play-offs in the 2016 and 2017-18 campaigns, respectively. He turned out for Odisha FC in the 2019-20 season. Chhuantea is also a former India international and 2015 South Asian Football Federation (SAFF) Championship winner.

Reagan began his professional career at Royal Wahingdoh in the I-League in 2012. After spending three years at the Shillong-based club, Reagan signed for NorthEast United FC in the ISL, where he made 69 appearances over the last five seasons. He played in 18 of NEUFC’s 21 games of the 2018-19 season as they made it to the semi-final stage. Reagan has also had spells at Salgaocar S.C. and Mumbai FC in the I-League.