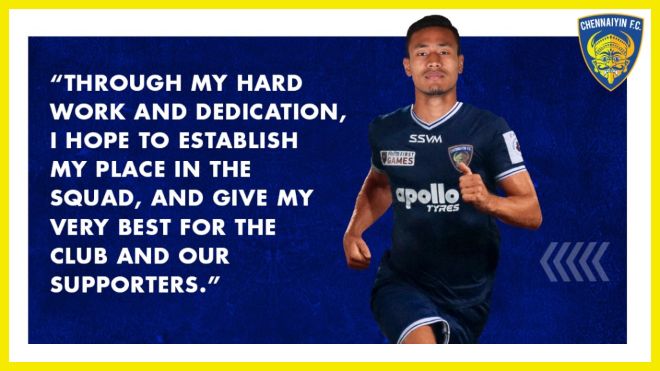 Chennaiyin FC announced the arrival of the 25-year-old centre back Salam Ranjan Singh, ahead of the eighth season of the Indian Super League (ISL 2021-22). The defender from Manipur joins Chennaiyin FC on a multi-year deal, following a stint at ATK Mohun Bagan in the previous campaign (ISL 2020-21).

“It feels amazing to join Chennaiyin FC. My aim is to help the club achieve its goals while garnering as much playing time as possible. Through my hard work and dedication, I hope to establish my place in the squad and give my very best for the club and our supporters. My hunger to perform has never been greater, and I have been focusing on my fitness and self-analysis so as to become a better player and a better professional,” said a determined Salam (Ranjan Singh) from his hometown after completing the move to CFC.

“Salam is an Indian talent with huge potential. We are positive he will grow and improve by leaps and bounds at Chennaiyin FC. He will be a quality addition to our squad in central defence. We are really excited to see him in action,” said CFC co-owner Vita Dani on the club’s latest acquisition, who is set to shore up the backline.

A product of the Pune FC academy, Salam won back-to-back youth league titles before being promoted to the senior team in 2013-14, as he featured in the I-League and AFC Cup for the Red Lizards. He then joined Bengaluru FC, with whom he won the I-League and Federation Cup trophies.

The 6’1″ defender then had a brief stint with NorthEast United, followed by two years at East Bengal. Salam has amassed more than 50 appearances in the I-League and has impressed one and all with his robust performances, possessing adept positional awareness and aerial ability, while not shying away from a crunching challenge.

Salam was first called up to the national team in 2017, having been picked prior at the youth level. Among his 11 senior caps so far are solid performances in the 2018 Intercontinental Cup triumph, along with game time in the 2019 AFC Asian Cup as well. Salam then returned to the ISL to play for ATK and was a member of the squad that won the 2019-20 title.