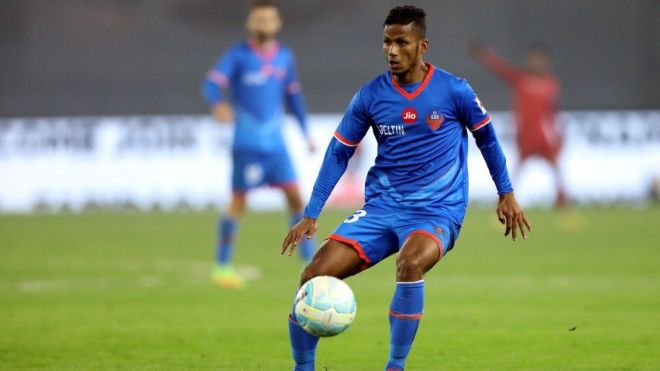 On Tuesday, Chennaiyin FC announced the signing of left-sided defender Narayan Das on a two-year contract starting with the ISL 2021-22 season. The 27-year-old joins after a season-long stint with SC East Bengal and is currently the second-highest capped player in the Indian Super League with 107 appearances to date.

Predominantly a left-back, Das is also capable of operating in central defence. And with over 200 senior career appearances for club and country, the Tata Football Academy graduate is an experienced campaigner who will fortify CFC’s ranks greatly.

“I am really happy to join a champion team like Chennaiyin FC. My family and friends are also overjoyed. It is every player’s dream to help his team win, and I am no different. I aspire to prove my worth, play every single game and help the club in fulfilling the quest for a third ISL title. Even as the opponent I have always enjoyed the atmosphere at the Marina Arena, and I want to tell our brilliant fans to keep supporting us because it is their backing that gives us the extra motivation,” said Das from his hometown in Bengal, after signing for the two-time ISL champions.

“We are really happy to welcome Narayan (Das) to the Chennaiyin family. All of us at the club are aware of his consistent performances over the years in Indian football, and we are excited to see him bring those qualities to the fold at CFC. As we strive for success, it will be imperative to bank on our Indian personnel, and Narayan (Das) ticks all the right boxes in that regard. I am certain he will fit in seamlessly into the team, and raise the level of our performances,” said Chennaiyin FC co-owner Vita Dani after Das’ arrival.

After taking his first steps in professional football with All India Football Federation (AIFF) developmental side Pailan Arrows, Das signed for Dempo SC in the I-League. He was then picked by FC Goa ahead of the inaugural ISL season and incidentally made his debut in a 2-1 defeat to CFC in both teams’ first ever game.

Das then plied his trade at FC Pune City during ISL 2016, sandwiched between his stay at East Bengal in the 2015-16 and 2016-17 I-League campaigns, respectively. He returned to FC Goa following the 2017-18 ISL draft and helped Sergio Lobera’s team reach the semi-finals. He then turned out for Delhi Dynamos FC and Odisha FC before featuring again for his hometown club SC East Bengal in their debut ISL season last time out. Das also has seven assists to his name in the ISL.

Having played for India at the youth level, Das received his first national team call-up in 2013, making his debut against Nepal. He was a member of the 2015 SAFF Cup and 2018 Intercontinental Cup-winning Indian teams; scoring his solitary goal for the country in a 4-1 win over Puerto Rico in a friendly in 2016.