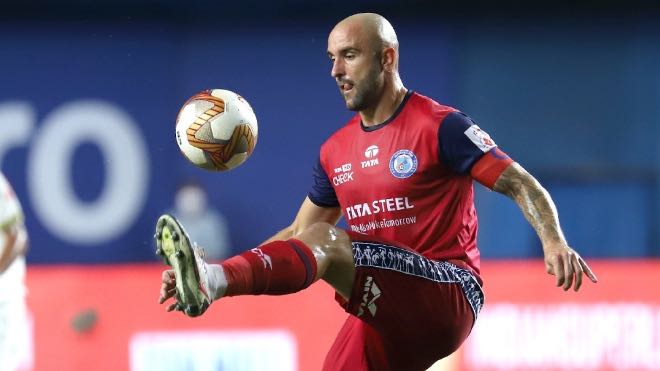 Jamshedpur FC successfully retained defender and club captain Peter Hartley for the eighth season of the Indian Super League (ISL 2021-22). The Englishman delivered consistently on the field and secured two Hero of the Match awards in 19 matches for the club.

The strong defender quickly became a fan favourite and was influential in leading Jamshedpur to a club record number of clean sheets (9) and ended the season with impressive stats – 52 tackles, 22 interceptions, 72 clearances and 23 blocks. He also scored 2 goals during the campaign.

On signing the dotted line, Peter exclaimed his joy on continuing in the red colours of Jamshedpur. He said, “I had an amazing season with Jamshedpur. We made a club record for the number of clean sheets in a season, and I hope we can better that record in the coming season and bring the ISL trophy home.”

Peter also underlined the importance of Head Coach Owen Coyle’s presence as he said, “We have a fantastic gaffer in Owen Coyle. I am thrilled to continue playing under his guidance and do well for him as well as for the fantastic supporters of Jamshedpur.”

The Gaffer himself was ecstatic to have the skipper continue. He explained the importance of having Peter in the squad, “We were mean in defence the previous season and a lot of it was down to how the skipper organized things at the back for us. Like I said when we signed Peter, he is a big player for us who hates conceding goals. He brings with him so much experience from the English and Scottish Leagues, something that evidently rubbed on to everyone around him. It was essential for Jamshedpur to have him again.”

Hartley is a Sunderland AFC Academy product. The left-footed centre-back was scouted into the Sunderland AFC youth system as a 12-year-old in 2000 and rose up the ranks with his impressive performances.

He played and trained with Sunderland’s senior team, too, and made his debut in 2007 versus Leicester City under Roy Keane. He went on a loan spell to Chesterfield FC and then switched to Hartlepool United in 2009, being the most capped player for Hartlepool during his four-year stint as well as captain for two seasons.

The defender has played in prestigious tournaments in England like the FA Cup and the League Cup where he represented his clubs against the likes of Chelsea, Everton, Sheffield United, Watford and Wigan Athletic. He also played versus Burnley in 2009, which was then under the management of Owen Coyle and also scored against Antonio Conte’s Chelsea in a 2016-17 League Cup tie.