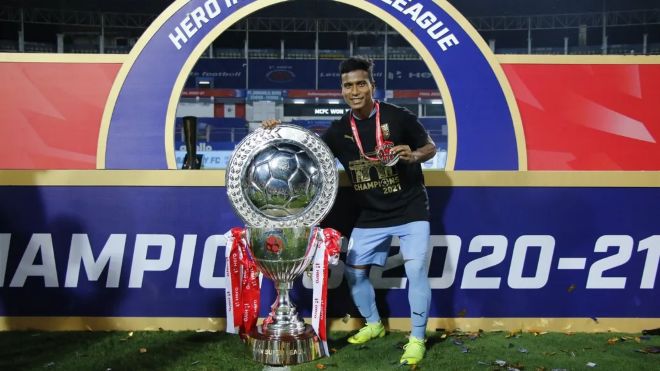 Ahead of the eighth season of the Indian Super League (ISL 2021-22), Mumbai City FC announced that the Pranjal Bhumij has signed a three-year contract extension which will keep him at the club until May 2024.

Born in Assam, Pranjal started his footballing journey playing for various clubs in Guwahati and then rose through the ranks at DSK Shivajians in the I League from the u18s to the first team. He featured for India at the youth level in the 2017 U-18 SAFF Championships in Bhutan and played in three out of the four games in the tournament. At the age of 18, Pranjal was picked by the Mumbai City FC in the 2017 ISL Draft, joining the club as a developmental player capable of playing anywhere across the attack.

The 22-year-old Pranjal has continued his development over four years with the Mumbai City FC and has 25 appearances for the club.

Pranjal made four appearances under Sergio Lobera in the recently concluded 2020-21 campaign and most notably got his first start of the season in the final game of the league stage against ATK Mohun Bagan.

Pranjal Bhumij said, “For the last four years, Mumbai City has been an immense part of my life. I have been able to gain so much invaluable experience from the different coaches I’ve worked with over the years. Moreover, the club has put their faith in me and I cannot express enough how thankful I am to them. I am only 22, I have a lot to learn and achieve, and I did not have to think twice before committing my future to this huge club. I hope I can repay the trust of the management, the coach Sergio Lobera, my teammates and our fans and keep giving my best every time I pull on the Mumbai City shirt.”

Head Coach, Sergio Lobera said, “I strongly believe that Pranjal is one of the best young talents in India. We see him in training every day and the quality and potential he shows really excites us for what the future holds. More importantly, he’s a wonderful person. He is an excellent professional who is determined to learn and he is very mature and level-headed for a young boy. His attitude with help him a great deal in his career. We are delighted that he will be continuing with Mumbai City and I wish him a very bright future with us.”