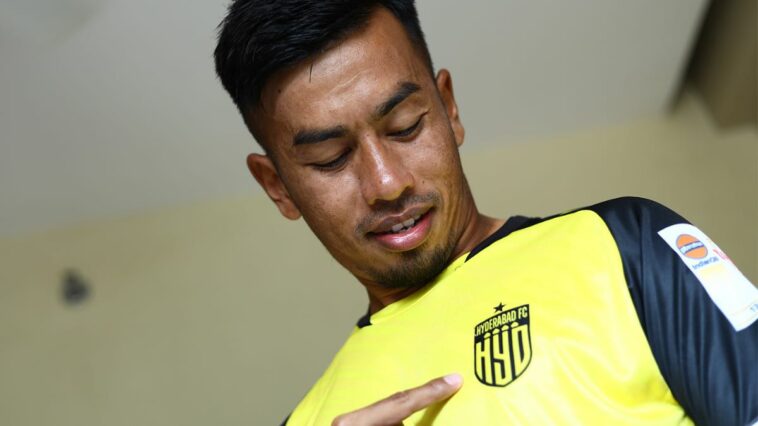 Ahed of the upcoming season of the Indian Super League (ISL 2022-23), Hyderabad FC have completed the signing of 31-year-old Manipur-born defender, Keisham Reagan Singh on loan from Chennaiyin FC, the club announced on Wednesday.

The 31-year-old defender joins Manolo Marquez’s side on loan till the end of the 2022-23 season and has already joined the first team in Manipur.

“I am really happy to join Hyderabad FC and to train under coach Monolo is an honour. I think he is the best coach in the country and this is a great challenge for me. I look forward to working and learning as a team and can’t wait to get started,” he said, after completing his move.

A right-back by trait, Reagan has 105 ISL appearances under his belt, playing for the likes of NorthEast United and Chennaiyin FC, to add to 48 I-League appearances in his career.

Breaking onto the scene with newly promoted side Royal Wahingdoh FC in the 2015 edition of the I-League, his no-nonsense defending was essential in helping the team finish third in the league. This also saw him rewarded with a call-up to India for the World Cup Qualifiers.

In July 2015, Reagan was drafted to play for NorthEast United in the 2015 Indian Super League.

On 7 January 2016, Salgaocar confirmed that they have signed Royal Wahingdoh’s star side back Reagan singh for 1 year. On 28 January, Reagan made his I-league debut against Shillong Lajong.

In July 2016, Regan signed permanently for NorthEast United. In January 2017, Reagan signed with Mumbai FC for the 2016-17 I-League season on loan. In September 2020, Reagan signed a one-year deal with Chennaiyin FC, later in June 2021 was extended for two years.