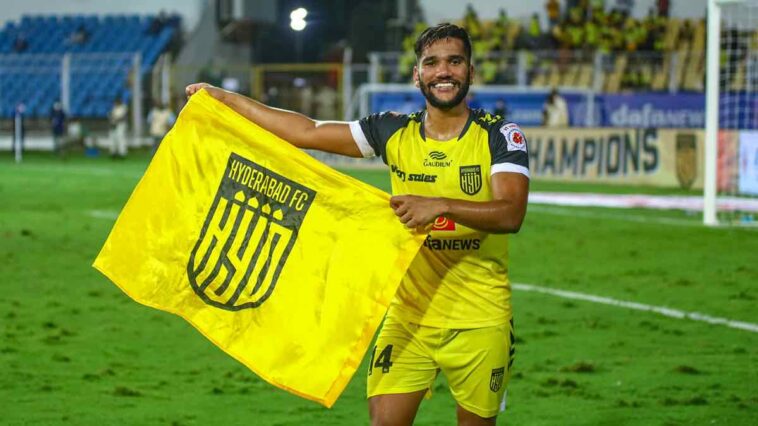 Ahead of the Indian Super League (ISL 2022-23), midfielder Sahil Tavora has signed a new deal with Hyderabad FC to extend his stay at the club till the end of the 2023-24 season, the club announced on Tuesday.

Tavora, who famously scored the 88th-minute equalizer in the ISL 2021-22 final back in March, was a key player for Hyderabad throughout the campaign.

He made 19 appearances for the club and registered a goal and an assist from midfield, often coming off the bench to change the tone of the game.

Speaking after signing his extension, Tavora explained what made this decision pretty easy.

“The progress the team as a whole and I as a player have made over the last two years under Coach Manolo Marquez was a major factor in me deciding to extend my contract here,” said the Goa-born midfielder.

With the experience of 45 ISL games (31 for HFC) under his belt and now a Champions’ medal on his neck, Tavora, who has been a part of Hyderabad FC since its inception says, “The family-like atmosphere not just between the players but also with the technical and non-technical staff makes it a pleasure to work day in day out.”

One of the few players in the current squad to have played in front of a packed Gachibowli Stadium, Tavora also had a message for the fans.

“I’ve been lucky enough to already play in front of our fans in Gachibowli in the first season. We missed them tremendously and really appreciated their support on social media. The atmosphere they create in the stadium is incredible, and I can’t wait to be back and play in front of them again,” he added.

“Tavora is a crucial player in our squad. But more importantly, he is a player who every coach wants to train,” said the Spaniard.

“He is technically good, is very strong in duels, can shoot from distance and is also a leader in the squad, on and off the pitch,” he added.