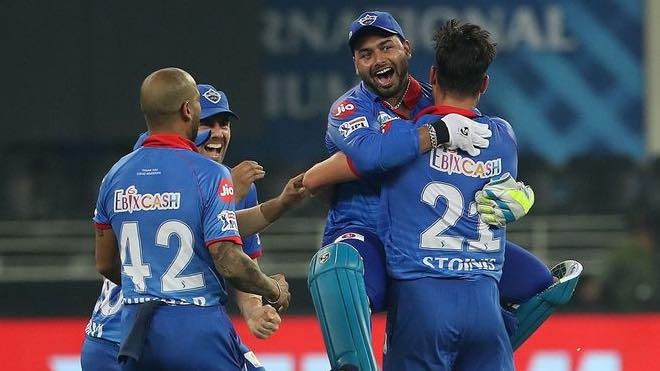 The 2nd match of the Indian Premier League 2020, the Northern derby, was nothing short of a thriller. The match ended in a draw after Kings XI Punjab (KXIP) needed only 1 run in 1 ball to win the match but Chris Jordan gave away an easy catch to DC fielder. The match changed hand multiple times. And at the end, Delhi Capitals (DC) managed to win the match in the super over.

KL Rahul asked Shreyas Iyer lead Delhi Capitals to bat first after winning the toss. Delhi got off to a disastrous start as they lost the wicket of Dhawan, Prithvi Shaw and Hetmyer inside the first four overs. But they fought well against KXIP and posted a target of 158 runs. In response Kings XI Punjab scored 157 runs to draw the match.

In reply, Punjab started off well. But that good start turned into a nightmare for KXIP. They lost four wickets for just 35 runs, while moments ago it was 30 runs without any loss. But it was Mayank Agarwal who took it to the very last ball before the match ended in a draw, resulting in the very first super over of this IPL.

But then captain Iyer and wicket-keeper batsman Rishabh Pant took control of the inning. Both shared 50 runs partnership before Rishabh Pant (31 runs of 29 balls) was shown the way to pavilion by IPL debutant Ravi Bishnoi.

The very next ball, Shreyas Iyer (39 runs of 32 balls) gave away his wicket to the man who was on fire with the ball today, Mohammed Shami. Both Pant and Iyer shared a partnership of 73 runs.

And when it was looking like Delhi Capitals team was all set to post a low target on the board, Marcus Stoinis had something else on his mind. He powered Delhi Capitals to a strong and fighting 157 runs. Stoinis scored 53 runs in 21 balls with 7 fours and 3 maximums with a strike rate of 252.38.

For Kings XI Punjab, as expected, Mohammed Shami lead the attack. He picked up 3 wickets by giving away just only 15 runs. Cottrell managed 2 wickets to his name and 1 wicket for young Ravi Bishnoi.

Kings XI Punjab got off to a good start in their chase. Captain KL Rahul took the attacking duties. It was all looking great for Punjab, but then, KL Rahul departed after scoring 21 runs. It was 30 for 1 but just after a blink later, it was 35 for 4. Karun Nair, Pooran and Glenn Maxwell, all failed, after Rahul’s departure, KXIP lost 3 wickets for just 5 runs.

But then Indian test team opener Mayank Agarwal, who was all the while still there in the crease, took control of inning and started to build the momentum. He got a little help from Sarfaraz Khan before he got out for 12 runs.

When only 4 overs left in KXIP inning, Mayank Agarwal shifted his gear straight to the maximum. Agarwal stood there till the very last over before was dismissed for 89 when just only 1 run needed. Last ball and still 1 run needed to win, Chris Jordan on strike, Stoinis the bowler, and Jordan gave away an easy catch to the DC fielder resulting in the match to end in a draw. Which means we got to see the super over in just only the 2nd match of the season.

Kagiso Rabada, Ravichandran Ashwin and Marcus Stoinis picked up 2 wickets each while Mohit Sharma and Axar Patel managed 1 wicket to their name.

So, as Kings XI Punjab batted in the 2nd inning, therefore they were to first out to bat in the super over. KXIP managed to score just only 2 runs in 3 balls, as Kagiso Rabada ripped apart the KXIP batting lineup for the super over by picking up 2 wickets.

DC needed just three runs to win this exciting Northern derby which was full of a thriller. And Delhi Capitals didn’t wasted too much time, it just took them 2 balls to win the match in super over.

Marcus Stoinis was awarded as the man of the match for his53 runs of 21 balls and wickets in 3 overs.