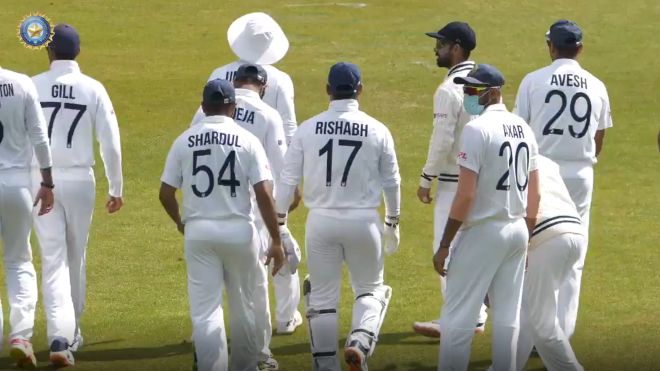 Team India’s preparation is in full swing ahead of the ICC World Test Championship Final. They are currently playing an Intra-Squad match amongst themselves to get fully ready for the grand showpiece event starting on June 18th.

Earlier BCCI also shared highlights of the action from day 1 of the Intra-Squad match. Moreover, they’ve shown glimpses of some training shots as well. Many were earlier saying that New Zealand are better prepared having played two matches against England.

But now it seems like Team India is also not far behind with their match readiness. Moreover, the Indian players will be better rested ahead of the finale and get ready to perform where it really matters.

The video shows clips of India’s batting rock Cheteshwar Pujara getting into the groove as well as KL Rahul smashing a huge six off Ravindra Jadeja. Pacer Avesh Khan was also seen bowling some good lines to the batsmen.

Rishabh Pant had a great day with the bat as the wicket-keeper batsman smashed 121* off just 94 deliveries. The Delhi boy continues his exceptional form and was at his aggressive best.

From a bowling perspective, Ishant Sharma had a fine performance as he picked up 3/36. Moreover, Ishant Sharma and Mohammed Siraj were seen batting together which is to increase the run contributions from the lower order.

Rohit Sharma and Mayank Agarwal were also seen spending some time together in the middle. However, it’s unlikely that the two of them will be opening together with Shubman Gill in the picture now. Gill had a fine day with the bat as well as he knocked up 85 from 135 deliveries.