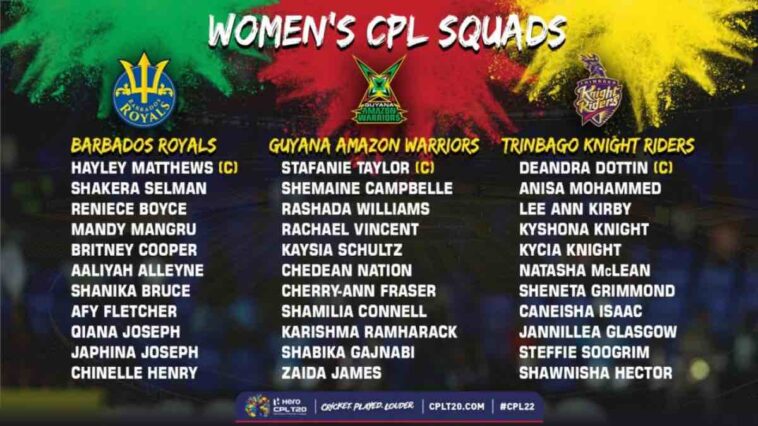 The local players have been drafted ahead of the historic first running of the inaugural Women’s Caribbean Premier League (WCPL 2022) with the tournament set to get underway on 30 August.

With Matthews and Taylor rated in the top 10 T20 all-rounders in the world and Dottin one of the most destructive batters in the women’s game, all three players have shown their quality for the West Indies and in domestic competitions around the globe.

The teams have been drafted from a pool of players that was put together by the Cricket West Indies selection committee and the 33 cricketers picked to represent the best talent from across the region with the squads full of experienced internationals as well as the next generation of female players.

Each team will also sign three exciting overseas players bringing the total squad size to 14 and further bolstering the quality of cricketers on show in this exciting new event. These overseas signings will be announced in the coming weeks.

Ricky Skerritt, Cricket West Indies President, said, “This inaugural Women’s version of the CPL represents a huge upward step for West Indies cricket. I am grateful to all those in CPL and CWI who made it happen, especially the three pioneering franchises who have so willingly got on board.”

Jake Lush McCrum, CEO, Barbados Royals and Rajasthan Royals, said, “The Caribbean and particularly Barbados is a destination which has always been so deeply invested in cricket, and to have a team in the region which will serve as a pillar of growth for the women’s game in and around the island nation, was such an exciting opportunity for us at the Barbados Royals. Having attracted huge popularity, not just in the Caribbean, but also in cricket-playing nations around the world, the CPL has been able to realise its value and also the impact it can create on grassroots development. With this new competition for women, it gives us the opportunity to accelerate the growth and development of female players and coaches, while attracting the next generation of talent to the sport.”

Bobby Ramroop, owner of the Guyana Amazon Warriors, said, “We are thrilled to be a part of the inaugural Women’s CPL. The Guyana Amazon Warriors (GAW) family is excited to be at the forefront of advancing Women’s cricket, both in the region and worldwide, and we are hopeful that this newest format will provide a platform for empowering female athletes, as well as highlighting inspiring role models for young girls. The dynamic GAW Women’s team, led by the impressive Stafanie Taylor, is a welcome and powerful addition to the CPL.”

Venky Mysore, Director, Trinbago Knight Riders, said, “We are proud to announce our first women’s team under the Knight Riders banner, and are eagerly looking forward to watching the ladies represent TKR in the inaugural Women’s T20 competition in this year’s Caribbean Premier League. We are always most supportive of such initiatives and are on a continuous lookout to expand the sport across the globe and across demographics. We are therefore particularly thrilled to support the launch of women’s T20 in the Caribbean and would like to congratulate and thank CWI and CPL for taking the initiative to launch the Women’s editions this year.”

Pete Russell, Hero CPL’s CEO, said, “A Women’s CPL is the next logical step as we grow the brand, and we are very pleased that we have been able to make this a reality in 2022. We are grateful to the CWI, the Barbados Royals, the Guyana Amazon Warriors and the Trinbago Knight Riders for working with us on this groundbreaking tournament and we look forward to showcasing the tremendous skills of all these talented players.”