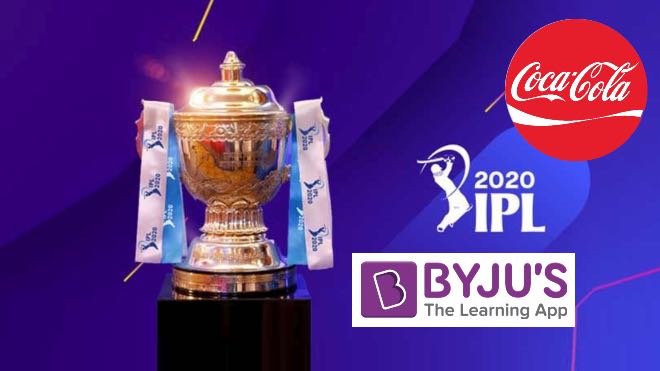 BCCI and Chinese mobile phone company VIVO have mutually suspended their contract for the 13th edition of Indian Premier League (IPL 2020) which was announced by BCCI on Thursday.

After this Board of Control for Cricket in India (BCCI) is likely to float a tender and invite bids for title sponsorship in the next few days as mandated by its constitution.

According to reports in Livemint, several firms, including Byju’s and Coca-Cola, are eyeing the IPL 2020 title sponsorship.

Byju’s, which is also the sponsor for the Indian cricket team and replaced Nokia as the team sponsor of Kolkata Knight Riders (KKR) in March and KKR co-owner Shah Rukh Khan is the brand ambassador of the company. The online education startup has set aside ₹300 crores for the sponsorship deal as reported by Livemint.

On the other hand, Coca-Cola India said it will continue to observe the situation before making a move but also insisted that it is committed to remain invested in cricket.

“We continue to stay invested in cricket and (are) observing how the situation evolves. We are awaiting more details before making a decision,” Coca-Cola said in an emailed reply to Livemint.

After the clash between India and China in the Galwan Valley, boycott Chinese product increased country and in June BCCI announce to review the sponsorship deals. However, in the Sunday’s IPL Governing Council meeting decided that VIVO and all other sponsors will remain onboard which received a huge backlash on social media. Later both BCCI and VIVO decided to suspend the deal for one season and will continue from 2021.

VIVO won the IPL title sponsorship rights for five years from 2018 to 2022 for a reported sum of Rs 2190 crore, approximately Rs 440 crore per annum. It will be interesting to see if BCCI can fetch anything close to this.