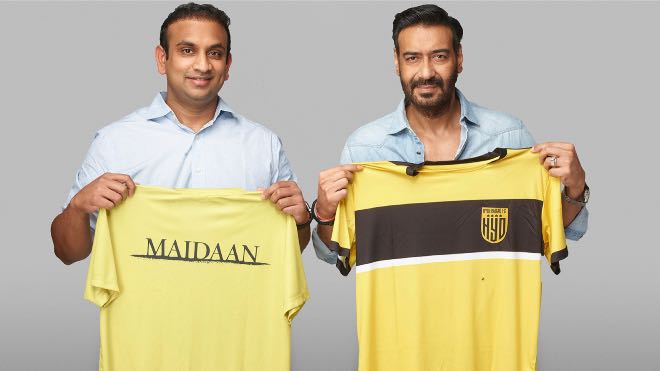 Hyderabad FC and Maidaan – a feature Hindi film presented by Zee Studios and Boney Kapoor have announced a unique partnership that aims at collectively working on giving a boost to grassroots football in Hyderabad and the country.

The one-of-its-kind collaboration of sports and cinema will elevate the interest of gen-Z and enable in developing and nurturing of young sporting talents of the country and also bring to light the unheard stories of the heroes of Indian football.

Speaking on the association, Varun Tripuraneni, Co-Owner, Hyderabad FC said, “We are honored and delighted to be associated with the Maidaan Team. This partnership will celebrate the legacy of Syed Abdul Rahim Sahab, who has been an inspiration not only to the football players in Hyderabad but across the footballing community in India. May it be from the times of Rahim Sahab to PV Sindhu, Hyderabad is known to have produced some of the finest sportsman of our country who have contributed immensely to their respective sport and remain the pride of our nation. It is truly a proud moment for all of us at Hyderabad FC to be representing a city which has a rich history and legacy in sports. Our association with Maidaan will aid us in taking football to every corner of the country and promote the sport amongst young and aspiring football fanatics.”

Boney Kapoor, Producer, Maidaan said “Our association with Hyderabad FC, is first-of-its-kind partnership in the industry. It is a natural fit as Maidaan brings forward the struggles and victories of Shri Syed Abdul Rahim just the way Hyderabad FC has overcome various challenges to rise from where they were in the league with sheer grit and determination. This is the beginning of a great friendship and partnership between two distinct entities.”

Amit Sharma, Director, Maidaan commented, “India has always been known to excel in the field of sports, be it cricket, football or even hockey- where India once dominated the sport for a long time. Our community is very passionate of the sport they play, and through this film our intention is to bring forth the journey of a passionate sportsman, who grew up playing football in the maidaans of Hyderabad and went on to become a national icon and role model to millions. Our association with Hyderabad FC is an ideal merger to propel football to new heights and revive the legacy of football across our country.”

Akash Chawla, Producer, Maidaan said “Sports and movies are two of the most preferred mediums of entertainment in India. India has a rich history of sports wherein; many unsung heroes have emerged. Unfortunately, many of them do not get the limelight and the appreciation that they deserve. Even today, many of them do not know about Shri Syed Abdul Rahim and his contribution towards football in our nation. Through our movie Maidaan, we aim at enlightening the country about his hard-work and contribution in building a strong legacy towards football in the country.”

Arunava Joy Sengupta, Producer, Maidaan said, “We have worked really hard to put together this film so that not just the people of our country but the world is made aware of the victories that India had in a short span right after getting independence. Especially in the times our nation was just budding and growing, the passion for sport back then created Heroes that need to taken as inspiration not just in football but also in Life. Our collaboration with Hyderabad FC is also the same, its unique and has a long-term goal of creating Heroes for our country in the sports that is the most popular in the world.”