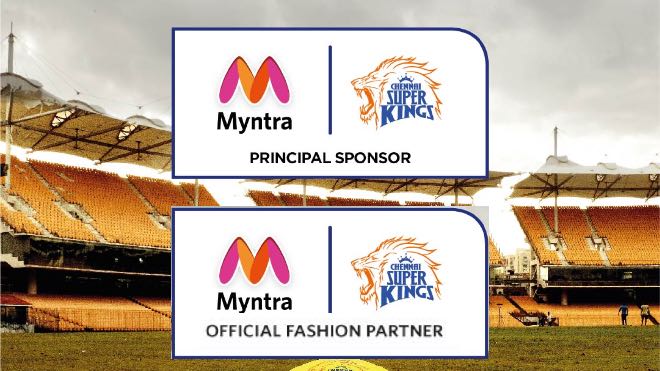 Chennai Super Kings (CSK) has signed Myntra as Principal Partner and Official Fashion Partner for the upcoming season of the Indian Premier League (IPL 2021). As part of the association, Myntra’s logo will feature on the front centre of the CSK team’s jersey in IPL 2021.

“As part of the collaboration at least three star players will be involved in various promotional activities that are aimed at engaging with a collective audience. Myntra and CSK will also work together to create unique and appealing digital content across social media. As part of this partnership, Myntra will enjoy a significant share of voice with multiple on-ground visibility features such as perimeter boards, LED walls, toss mats, among others during all CSK home games,” a statement from Myntra said on Monday (March 8).

In IPL 2020, Myntra was the Chennai Super Kings’s E-Commerce partner which was played in UAE from September 19 to November 10, 2020.

“We are thrilled to become the official fashion partner of Chennai Super Kings for the upcoming season. By placing our brand right at the heart of one of the most celebrated teams in the league, Myntra is set to entice the die-hard fans of the game and team CSK in particular. As the one-stop-shop for fashion in the country, this partnership will add a distinctive dimension to our fashion proposition as we await to touch millions of the Yellow Army hearts,” Myntra CEO Amar Nagaram said.

“Fashion, lifestyle and sport are indelibly linked. I am glad Myntra has decided to scale up their partnership from last season and CSK is delighted to have the opportunity to access Myntra’s multi-million users in the country. As pioneers in India’s e-commerce play, Myntra makes for a perfect partner for CSK, a franchise whose history is about consistently achieving excellence. We look forward to a long and mutually rewarding association,” CSK CEO KS Viswanathan said.