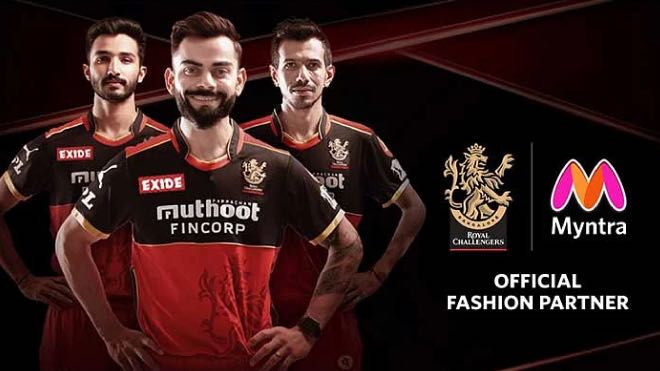 Royal Challengers Bangalore signed Myntra as the Official Fashion Partner for the upcoming season of the Indian Premier League (IPL 2021). As part of this association, Myntra will create unique content stories with RCB through the lens of fashion, while also extending the association onto the Myntra app with various offerings.

Myntra and RCB are set to create about 150 engaging videos for the die-hard fans of the game under four broad themes, which will be released on RCB’s social channels. These are Bold Diaries – series of videos showcasing the ‘behind the scenes’ life of an RCB player, RCB Insider – a satirical and humorous series of videos mainly led by the very popular character ‘Mr. Nags’, played by comedian Danish Sait, Game Day – videos that show different interviews with the players and coaches before and after the match, and RCB 12th Man – a series of videos completely dedicated to RCB fans.

Speaking on the association, Harish Narayanan, CMO Myntra, said, “We are delighted to announce our partnership with RCB, after a very fruitful association in the previous edition. Our collaboration with RCB will touch millions of fans, a number that’s considered one of the highest among T20 teams, across the team’s social media platforms. This is a unique association as it allows us to integrate our brand presence and engage with the audience at various levels across all leading communication channels of the franchise. We look forward to an exciting T20 season that will allow us to form deep and lasting connections with the league’s enthusiasts.”

Speaking of the partnership, Rajesh V Menon, Vice President & Head of Royal Challengers Bangalore, said, “We are delighted to partner with Myntra in the consecutive year, the leading e-commerce platform for fashion in India. RCB shares the same ethos of being a cutting- edge lifestyle brand, and this association further helps enhance the proposition. In addition to our official partnership, we are glad to also have Myntra as our lead sponsor on our marquee digital content properties – RCB Insider, 12th man TV, Bold Diaries and Game Day. This truly enhances the opportunities for bespoke brand integration, reach and engagement of the partnership.”