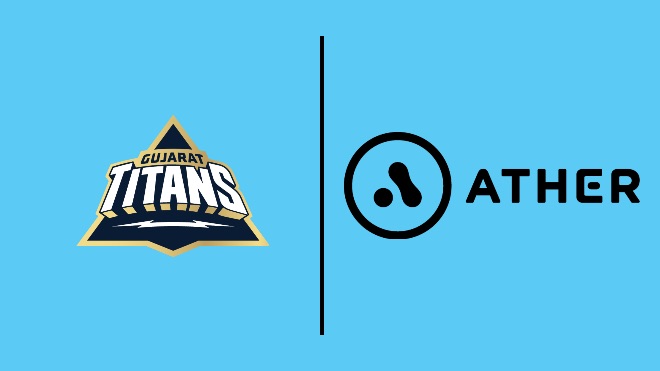 Ahead of the 15th edition of the Indian Premier League (IPL 2022), the newly formed IPL Ahmedabad franchise – Gujarat Titans have signed a multi-year partnership with Ather Energy as their principal sponsor. The strategic partnership starting from this season will see the Ather Energy brand on the front of the Gujarat Titans’ official team jerseys.

Ravneet Singh Phokela, chief business officer, Ather Energy, said, “We are thrilled to partner with the Gujarat Titans team, who will make their debut in IPL in the upcoming season. Being relative newcomers in our respective fields, what binds us are shared values of fearlessness and positivity, and a hunger to make a difference in our highly competitive environments.”

“Ather is rapidly expanding across the country, with a presence in 24 cities and expected to be across more than 100 cities over the next 12 months. The scale and reach of IPL provides a great platform for us to rapidly drive awareness and familiarity for the brand across the country, as we expand our geographic footprint. But beyond just reach numbers, the IPL has the unique advantage of being a sporting event whose appeal cuts across age and gender boundaries, engaging the entire household. This gives us the opportunity to introduce our scooters to a larger audience and accelerate the adoption of EVs across the country,” Singh added.

Colonel Arvinder Singh, chief operating officer, Gujarat Titans, said, “We are delighted to join hands with Ather Energy, a young and flourishing company that has been leading the way in the EV sector in India. The blend of youthfulness and strategic thinking that Ather Energy projects resonates with us as a team as we embark on a journey with youthful spirit and determination in mind to make our mark in the league. We hope to work together with great synergy to achieve our goals.”

Gujarat Titans are one of the two newest teams to join the league, Gujarat Titans have been actively building the squad, coaching and management the team. Hardik Pandya has been appointed as team captain, with Rashid Khan and Shubman Gill also selected as squad members.

In the recently concluded IPL 2022 Mega Auction, the Gujarat Titans team have roped in leading cricketers such as Mohammed Shami, Jason Roy, Lockie Ferguson, David Miller and Vijay Shankar. The cricket team management will be led by Vikram Solanki, who will hold the position of director of cricket, with Ashish Nehra as the head coach. Gary Kirsten will act as the Titans’ Mentor and Batting Coach.