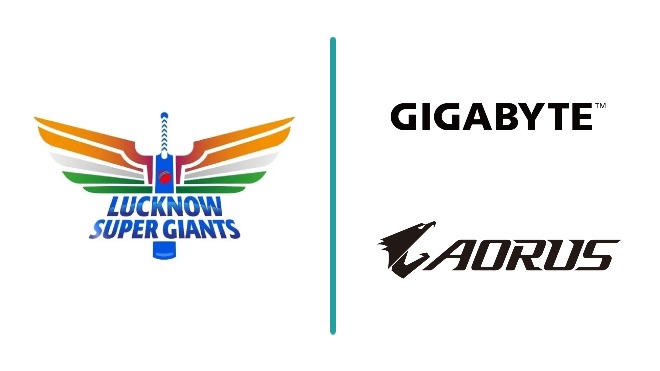 The new Indian Premier League franchise, Lucknow Super Giants today announced Gigabyte Technology and AORUS as their associate sponsor for the 15th edition of the Indian Premier League (IPL 2022). Headquartered in Taiwan, Gigabyte is the market leader in the PC and gaming motherboard segment in India. AORUS was launched in 2014 as the company’s gaming brand.

Gigabyte will sponsor the team’s headgear (helmet and cap), with logos on the side and back. While the Gigabyte logo will be visible on the side of the Lucknow Super Giants’ headgear, the company’s gaming brand ‘AORUS’ will be present on the back.

The partnership between Gigabyte and the new IPL franchise is a strategic win for both, as a unique marketing approach will help them to reach out to and engage with a much larger spectrum of the audience who love both sports and Esports. The organization has been making significant investments in the gaming industry in the past few years and this will be their first foray into advertising in sport.

Commenting on the association, Raghu Iyer, CEO, Lucknow Super Giants, said, “We are delighted to be partnering with a global enterprise like GIGABYTE. We are sure this relationship will be mutually beneficial for both companies. We aim to make our partnership a powerful enabler and medium for their brands to communicate with their customers. GIGABYTE believes in pushing the boundaries of performance with its products. We share these values and see synergies. We look forward to helping them achieve the best possible exposure.”

Sunil Grewal, Director, GIGABYTE Technology said, “Lucknow Super Giants and GIGABYTE are a perfect fit. Both are challenger brands with a focus on breaking limitations. The freshness of the new franchise, the potential and energy of the huge region it represents resonates with our endeavours in the country. We hope to build a strong long-lasting alliance.”

“Lucknow Super Giants is a team that shares many of our core values. They bring an extraordinary level of ambition to the sport of cricket. This partnership is just perfect for us as it will help us connect with younger and much wider audience across the globe,” said Sashank Bhandaru, Marketing Manager, GIGABYTE Technology.

The RPSG Group-owned new IPL franchise Lucknow Super Giants will be strengthening their squad in the upcoming player auction. KL Rahul, Marcus Stoinis, and Ravi Bishnoi were their initial signings.