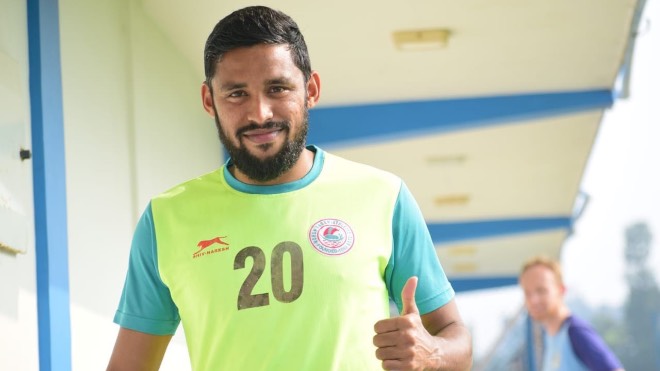 NorthEast United FC have roped in Kerala-born striker VP Suhair ahead of the 2020-21 Indian Super League (ISL) season. The forward had a strong 2019-20 campaign with I-League champions Mohun Bagan AC, scoring twice and assisting two times in 16 appearances for the Mariners.

“I am very excited to be a part of the Highlanders family and play in the Indian Super League. There will be a lot to learn from Head Coach Gerard Nus and Coach Khalid Jamil, and I cannot wait to join the rest of the squad for pre-season,” Suhair said after signing his contract.

A promising talent from a young age, the forward was a part of the State Bank of Travancore’s football team, when he impressed in the Santosh Trophy for the Kerala state team and was signed by second division side United SC. After impressing with his new club, the forward moved to Gokulam Kerala FC.

Suhair’s career has been back and forth between Kerala and West Bengal since, having joined East Bengal FC from Gokulam Kerala FC in 2017. He returned to Gokulam on loan in 2018, before joining Kibu Vicuna’s Mohun Bagan from their rivals East Bengal last year.

“Suhair’s performances in last season’s I-League really impressed the coaching staff at the club and we believe he will be an important addition to the team’s attack. He is a player who has the knack of finding the net and we are excited to see how he contributes to the team for the season ahead,” NorthEast United’s Executive Director Priya Runchal said about their latest signing.

After a successful season with Mohun Bagan, Suhair will look to replicate his form for the Highlanders, with the 28-year-old looking set to make his ISL debut during the 2020-21 campaign. He will look to link up with Federico Gallego and Luis Machado, who will be a part of NorthEast next season under new head coach Gerard Nus.