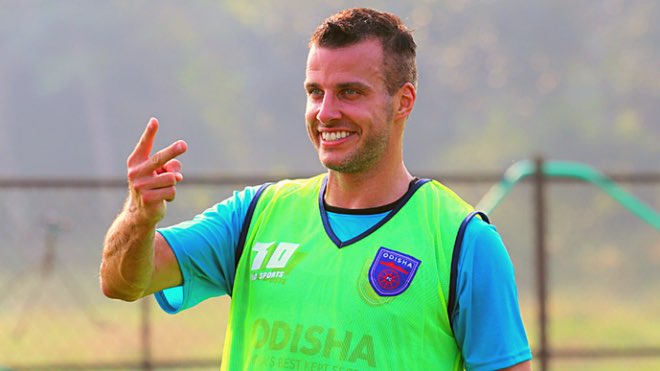 In September, Odisha FC signed Steven Taylor over a one-year deal with an option to extend for a second year.

Head Coach Stuart Baxter announced his decision before citing Steven’s experience and leadership qualities as the pillars behind the appointment.

“Steven will lead Odisha FC as captain for the upcoming season. As you already must have noticed in the training sessions, his intent to mentor the young players, commanding presence and winning mentality shall help the team enormously. I am sure that he will be one of the best leaders in the Indian Super League and the team shall be able to use his qualities to maximum effect,” Stuart Baxter said.

Steven was delighted with his new responsibilities and the Englishman’s enthusiasm was apparent in his address to the team.

“We are a family. We have to stand by each other and be there for each other on and off the field. Keep believing in yourself and I am confident that we shall have a special season. We will learn in every training session and in every game and we will grow from those experiences. I am happy to be here amongst all of you,” Steven said.

Taylor is poised to lead the team out against Hyderabad FC on November 23, 2020, in the first game of what promises to be a unique season.