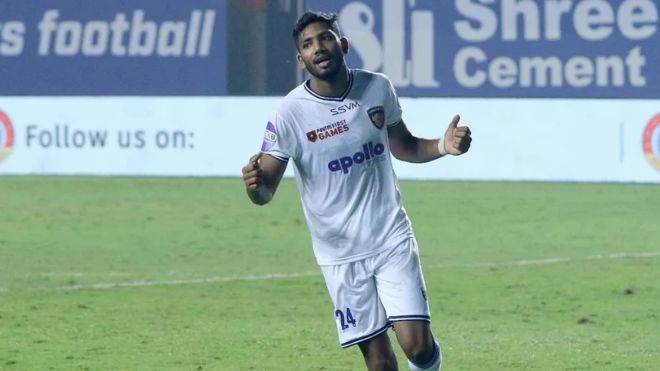 Ahead of the eighth season of the Indian Super League (ISL 2021-22), Forward Rahim Ali has signed contract extension with Chennaiyin FC that sees him continue at the club for two more years, till 2023.

“I am really excited to continue my journey and learning with Chennaiyin FC. I feel really good, having extended my stay at the club. I am looking forward to getting back on the pitch in CFC colours. The last season in Goa was one of immense experience and exposure. I am really grateful for the opportunities I have received; that I got a chance to prove myself,” Rahim said after signing the contract extension.

“I will work extremely hard to be more involved in the coming seasons and deliver for CFC. We can’t take anything for granted in football. It will be a fresh start. My message to the fans is that I really miss them. We all at CFC miss them dearly. I am elated to further strengthen my bond with the Chennaiyin faithful, and I along with the team do hope to bring joy to them in the coming times. This is an extremely challenging period for all of us, and I only hope they are all safe and doing well,” Rahim added while sharing an emotional message to the club’s supporters.

A product of the All India Football Federation (AIFF) Elite Academy, Rahim joined CFC from their developmental side Indian Arrows in 2018, having featured in the FIFA Under-17 World Cup a year prior. The India youth international spent the following season on loan back at Indian Arrows, before being handed his Chennaiyin FC debut during the memorable 2019-20 campaign that saw the club reach a third ISL final in six years.

“We are immensely delighted to have Rahim (Ali) continuing his journey and development with us. Last season he showcased the potential he possesses, and we are excited to see him go from strength to strength in the coming campaigns. Rahim (Ali) represents the present and future of Indian football, and we are really happy to see him grow in CFC blue,” said Chennaiyin FC co-owner Vita Dani following the welcome development.

Rahim’s stock has only risen in the last two ISL seasons, as he has also shown the versatility to operate in the forward areas, even playing as a winger on many occasions. He also led the line to good effect whenever called upon to play that role, showcasing composure and guile on the ball, while bagging goals against FC Goa and SC East Bengal last time out.

Exciting times lie ahead for Rahim and Chennaiyin as the budding Indian attacker aspires to take his game to greater heights in the coming years.