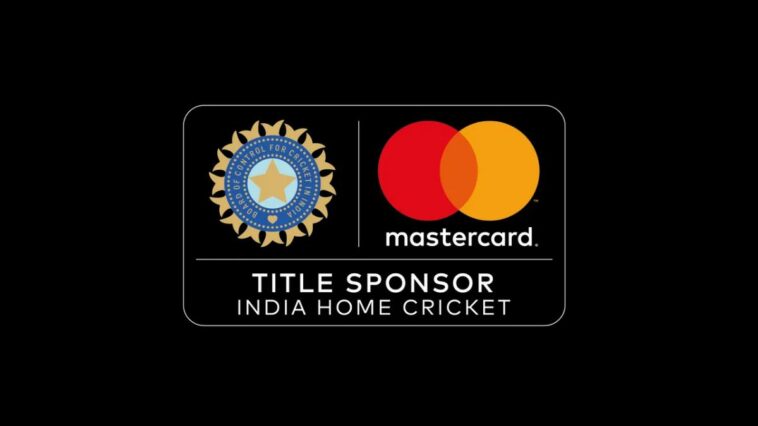 Mastercard, the American multinational financial company, today announced its collaboration with the Board of Control for Cricket in India (BCCI) to broaden its strategic outreach to Indian audiences.

During this association, Mastercard will be the title sponsor for all international matches (both women and men) held on home ground, domestic cricket matches like Irani Trophy, Duleep Trophy, and Ranji Trophy organized by the BCCI as also all junior cricket (Under 19 and Under 23) matches held in India.

Mastercard replaced PayTM, an Indian Fintech company, that held the rights for seven years. PayTM had replaced Micromax after a successful bid of Rs 2.42 crore per match in October 2015. Then in August 2019, PayTM renewed their deal for up to March 2023 with a winning bid of Rs 3.80 crore per match – a 58% increase from the previous deal.

The company is invested in sponsorships worldwide and has been associated with the UEFA Champions League, the Grammys, the Cannes Film Festival and the Australian and French Open tennis tournaments.

Sourav Ganguly, President, Board of Control for Cricket in India (BCCI) said, “The BCCI welcomes Mastercard as the Title Sponsor for home cricket matches for the 2022-23 season. Along with the international home series, the BCCI’s domestic tournaments are crucial as they are a stepping stone towards making India a strong international side. The BCCI truly values Mastercard’s support in building Indian cricket. This sport is more than a passion point, it’s a way of life and we look forward to some innovative experiences for the fans via this partnership and delivering value to Mastercard through this collaboration.”

Jay Shah, Honorary Secretary, BCCI said, “The BCCI is pleased to associate with a global marquee brand – Mastercard. We are in for an exciting period in Indian Cricket as we have Australia and South Africa coming over for white-ball series before the T20 World Cup and Sri Lanka, New Zealand and the prestigious Border-Gavaskar Trophy early next year while domestic cricket has a packed calendar with the return of the Duleep Trophy and a full-fledged Ranji Trophy season. The 2022-23 season will witness a lot of action across age groups and I am confident that this will be an enriching partnership.”

Raja Rajamannar, Chief Marketing and Communications Officer, Mastercard said, “Cricket is a perfect amalgamation of sports and entertainment with immense potential to deliver priceless moments. Our globally recognized “Priceless” platform offers us the unique opportunity to delight our cardholders, customers and partners worldwide. Cricket enjoys unparalleled popularity not just in India where it is a singular unifying force for the nation, but also in several countries around the world. It is therefore particularly relevant and opportune for us to have acquired the title sponsor rights for all home international and domestic cricket matches organized by the BCCI.”

MS Dhoni, India’s legendary cricketer who has been Mastercard’s ambassador for over four years added, “Cricket has been my life and given me everything I have. I am thrilled that Mastercard is sponsoring all the home cricket matches of the BCCI, and especially the domestic, junior and women’s cricket. The Ranji and junior players of today will play for the country tomorrow and continue to embody the pride of 1.3 billion Indians.”