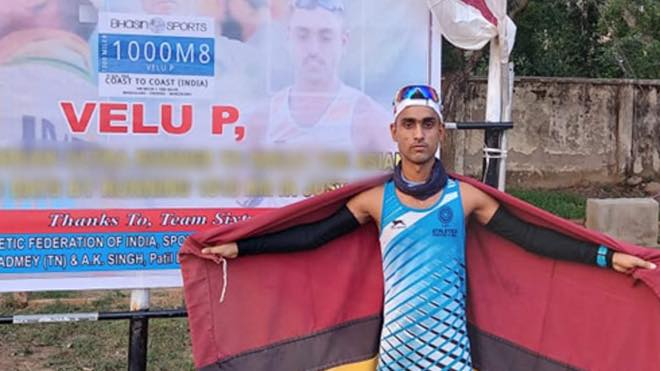 Recently, Naik Velu P, a nursing assistant at the 60 Field Hospital of Para Brigade in Agra, won the hearts of the nation with his latest sport achievement. He is the first Indian ultra-runner to break the Asian record by covering 1000 miles in 17 days.

Velu hails from Krishnagiri, Tamil Nadu, and was born on April 21, 1991. The coast to coast 1000 miler race was conducted online in India for the very first time, that started on July 1, 2020, and is expected to end on 31st December 2020. The participant is free to select the location as per his/her preference regarding the race. Through this tedious and challenging race competition, Naik has secured his position in the Limca Book of Records.

Naik joined the Indian army during the year 2011, soon after the Indian army acknowledged him for his astounding athletic capabilities. Subsequently, he was included in the Athletic Federation of India in 2016, wherein, he actively represented the country on numerous sports events. There are a plethora of various other sports records that have been smashed successfully by Naik P Velu.

The undaunted athletic zeal of Naik Velu P can be assessed from the fact that he has already started training himself in order to ace his next project- Guinness World Record. Naik’s aim is to cover a total distance of 41,000 km by running from Kashmir to Kanyakumari.