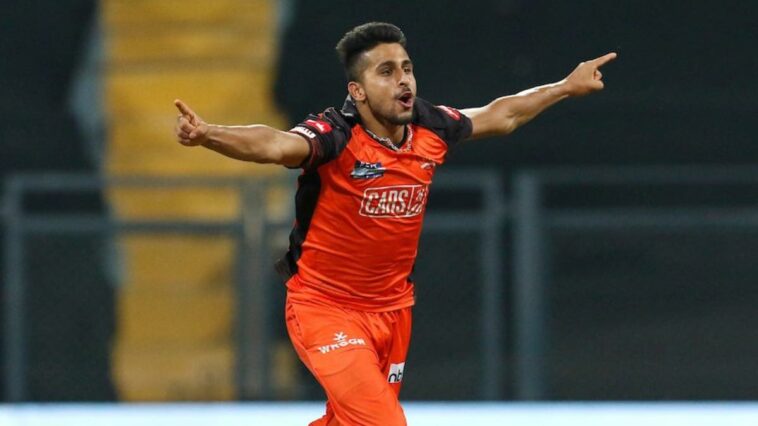 Many Indian legendary cricketers have reacted to the selection of young Indian pacer Umran Malik for his maiden team India call-up for the 5-match T20I series to be played at home against South Africa from June 9. The Jammu and Kashmir bowler has impressed everyone with his raw pace.

In IPL 2022, Malik ended up taking 22 wickets in 14 matches, which was the most for a SunRisers Hyderabad bowler. Malik consistently bowled above the 150 kmph mark and also recorded the fastest delivery of the season at 157 kmph.

Former Indian captain Mohammad Azharuddin took to Twitter to talk about India’s future pace sensation Umran Malik. Azharuddin thinks Umran deserves a place on the Test side too. He has also spoken about the support from the BCCI to preserve this talent and guide him so that he can bring out his best for the country.

Azharuddin also added the need for support that an express paceman needs to stay fit.

“Umran Mailk deserves to be picked in the Test team. Managing his workload is critical, failing which he can succumb to injuries. Hope he is provided the support an express fast bowler needs. #UmranMalik #IPL2022,” tweeted Azhar.

A day after being named to the team, Umran met his mentor Irfan Pathan and they had a ‘tiny celebration’.

Irfan Pathan was the mentor of the Jammu and Kashmir side and there he took Umran under his mentorship to groom him. In his recent interviews, Umran revealed how Irfan Pathan had helped him. He added that this year he is trying to work on hitting the right areas.

“Speed comes naturally to me. This year I am trying to work on hitting the right areas. I always used to bowl fast. I am my own role model. When Irfan Pathan came to train us, I used to jump out and I was pretty erratic, I was not able to bowl in one area consistently. But when he came, I began to jump out less and I started getting the right rhythm. I just want to make Jammu and Kashmir proud and I want to make the country proud. I just want to perform well,” Malik had while speaking to NDTV.

Virendra Sehwag has also praised him and several others for making a place in the 18-member squad. Prominent among them were Umran Malik, Dinesh Karthik and Arshdeep Singh. Karthik has impressed the BCCI selectors with his finishing skills for Royal Challengers Bangalore while the other two Umran and Arshdeep did well for SunRisers Hyderabad and Punjab Kings respectively.

The 23-year-old left-arm pacer Arshdeep has shown amazing control in the death overs. Sehwag also told that Arshdeep has impressed him because he has bowled two of the last three overs for the Punjab Kings.

“Arshdeep has impressed me because he bowls two of the last three overs for Punjab Kings. He may not have that many wickets, but his economy rate is brilliant. A bowler who bowls one over with the new ball and two in the slog overs, I have only seen Zaheer Khan and Ashish Nehra do that during my time. Now, it’s Arshdeep and Bumrah, even Bhuvneshwar. these are bowlers who bowl one or two overs with the new ball and then bowl in the death too with the old ball. It is a very difficult job to bowl in the slog overs. Arshdeep has done that,” Virender Sehwag said in an interview with Cricbuzz.