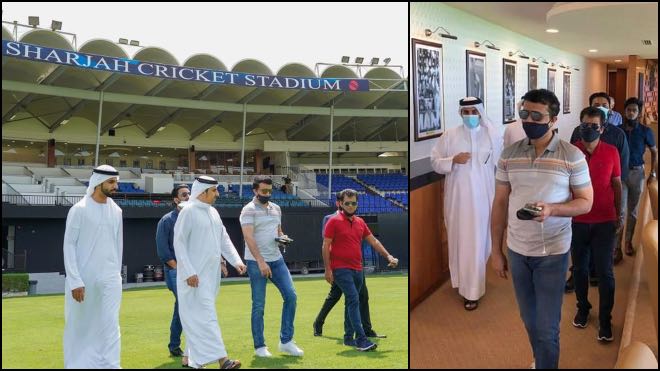 On Monday, BCCI President Sourav Ganguly reached Sharjah to do a recce of the arrangements at the Sharjah Cricket Stadium for the 13th edition of Indian Premier League (IPL 2020) starting from coming Saturday, September 19.

The former India captain Sourav Ganguly last played in Sharjah in 2000 was visiting the stadium after 20 long years in a completely different capacity. He has played enough cricket in Sharjah – including featuring in several of the famous India-Pakistan clashes. He scored a century (105) against New Zealand in 1998 in Sharjah and shares many a fond memory of the venue.

Ganguly has reached UAE on September 9 and was in isolation for six days after which he started inspecting the preparation of the bio-secure bubble.

The Sharjah Cricket Stadium is undergoing a makeover with new canopies which have added a splash of colour and upgraded Royal Suite and VIP hospitality boxes as it gears up to host the IPL 2020.