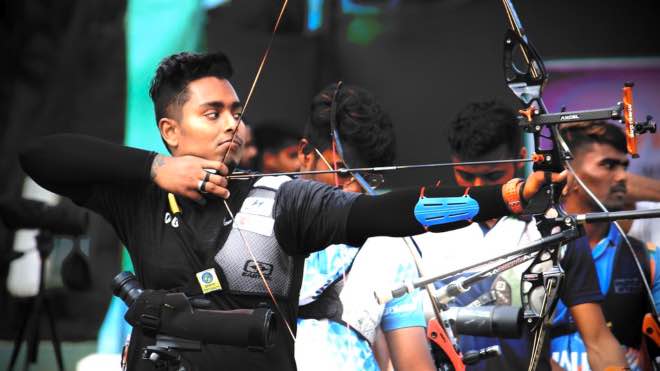 Indian archer Atanu Das ensures the country that he will ensure to deliver his best during the much-awaited Tokyo Olympics 2020. He has immersed himself with a strict schedule and has been extremely disciplined towards his training in the archery. Furthermore, he is optimistic that there has been a substantial improvement in the quality of his shots.

Almost four years ago, the 28-year-old had also participated against South Korean Lee Seung-Yun during his maiden Olympics tournament.

“I was very excited for my first ever Olympic Games in 2016 Rio. I had given my best and pushed myself the hardest way but unfortunately, I lost in the quarters. Maybe that was my best at that time. I learnt a lot after that loss,” he said in an online live chat show ‘In the Sportlight’.

He further adds, “I noted down my strong and weak points and worked on them. I was so disappointed after that loss that I didn’t want to talk to anyone for the first two months. It’s very important how you manage your thought process even at the time of practice as well. You have to be honest with yourself. After one month from Rio loss, I started working on the mental aspect of the game.”

The Arjuna Award winner is also a member of the national camp and is all blood and sweat due to his training at ASI Pune. Das along with Tarundeep Rai and Pravin Jadhav have qualified for the Tokyo Olympics in the men’s recurve team event after a spectacular delivery at the 2019 World Championships.

He further reminisced the initial memories of his journey to be the undisputed king of archery, “I started archery in 2006. I wanted to practice in Tata Archery Academy but when I went there I got rejected in a day. I was so disappointed and made my mind that I have to do this and I will go to that academy by hook or by crook.”

Furthermore, he stated, “Then I started working hard and within six months there were sub-junior nationals — my first ever nationals in recurve archery. I won individual gold and then that academy selected me in 2007. I started taking archery seriously with the dream of taking it to next level.”