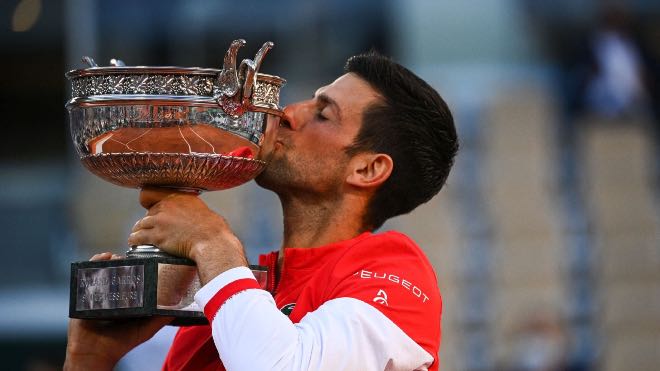 Djokovic wins the French Open for the second time, beats Stefano Tsitsipas in a five-set marathon

The world number one tennis player Novak Djokovic won the French Open for the second time in his career. With this, he now has 19 grand slam titles in his career. He defeated Stefano Tsitsipas of Greece in the men’s finals of the 2021 French Open. Djokovic defeated Tsitsipas by 6-7, 2-6, 6-3, 6-2, 6-4 in the final encounter played in Paris which went for more than four hours.

Talking about the encounter, The first set between the two players went nail-biting, and at one stage the score was level and went to the point of a tiebreaker. Tsitsipas managed to win the set by 6-7.

The second set was particularly dominated by Tsitsipas. The 22-year-old Greek put Djokovic under pressure and on the backfoot and he won the second set convincingly by 2-6. If Djokovic has to win the final from here, he needs to win all three sets. Tsitsipas needs just one set to win his first French Open.

The third set was the turning point for the Serbian as he showed resilience and staged a sensational comeback by winning the set by 6-3 and with this, the match moved on to its fourth set. Then there was no looking back for Djokovic. He cruised with the momentum in the fourth set and played sensationally and put Tsitsipas under the pressure zone. He won this fourth set by 6-2, it’s just the reverse of the situation that happened in the second set.

The match had then reached its fifth and final set which would decide the champion of the French Open. Djokovic held his nerve in this set as it was nerve-racking but ultimately won the set by 6-4 and became the winner of the French Open for the second time in his career. This win was even more as he was trailing by 2 opening sets. Last year also, Djokovic went to the finals but ended up as Runner up. He was beaten by Rafael Nadal last year.