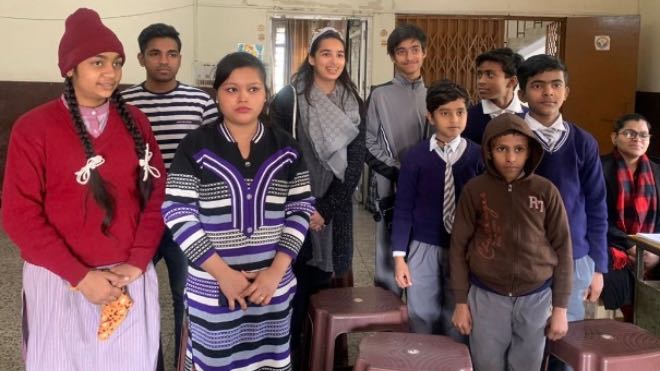 Samvedna: Up-skilling the chess aspirants from the Ghettos of Delhi

Samvedna- a sports foundation inaugurated in September 2019- pioneered by a brother-sister duo aims at encouraging chess amongst the underprivileged aspirants throughout the nation. Founded by Bhavik (13 years old) and Bhushita Ahuja (15 years old), who are also former chess champions, have envisaged empowering the children from Delhi and from the rest of the underprivileged districts to take up sports; with chess on the forefront, especially in the regions where resources are scarce.

At the age of 10, Bhavik added laurel to the country, by winning a bronze medal in the Commonwealth Chess Championship in 2017, whereas, his sister Bhushita was crowned as Delhi State U-17 Women Champion. Both the chess maestro’s have also represented the country in Teplice (Czech Republic), and London.

“Both of us have been playing chess since we were five (Bhavik) and seven years (Bhushita) old, respectively. Having played a million tournaments and spent a gazillion hours in front of the chessboard, this sport has become our passion,” the duo told Sportskeeda in an exclusive interview. They further added, “We wanted to spread the fire of sports in others and especially conduct classes in the slums of India to foster young talent and provide resources and opportunities to the underprivileged to help them grow and achieve.”

Through this foundation these teenagers are determined to introduce chess in schools and universities across the nation, thereby eventually restoring the recognition of chess that it deserves. Chess is one of the best exercises to train the logical, analytical, and creative aspects of the mind. Along with these, it also inculcates the virtue of patience in an individual.

“Samvedna club is proud to announce that we’ve got 185 members till now, 30+ participants in each of the events, and about 45 sign-ups for our Inspire talk. The biggest tournament so far was the inter-school online event wherein we got 17 school teams and a total of 160 participants,” the brother-sister duo informed.

Amidst the COVID-19 pandemic lockdown, whilst various sports tournaments were either cancelled or postponed due as a precautionary measure, the siblings were able to sustain the operations for Samvedna. As per their recent interview they stated, “We’ve organized five tournaments after the nation-wide lockdown and one ‘Inspire Talk’ by Grand Master Prithu Gupta.

“The tournaments were different formats like blitz, 3-check, crazy house, and bullet. One of the events was also an inter-school one,” they explained. “We’ve got a great response in all our events so far’’. However, visits to the vulnerable areas such as – Ghetto’s (Bastis) had to be rescheduled due to ongoing pandemic that impacted the weekly classes. Moreover, their annual event has been rescheduled to December 2020.

DCA- Samvedna Tournament 2019- that was hosted by, ‘The Banyan Tree School’, New Delhi on the 14th and 15th December 2019. The tournament was sponsored by the Ahujasons, ONGC, and Punjab Kesari, in collaboration with the Delhi Chess Association. The tournament received an overwhelming response – with approximately more than 250 participants. The revenue that was generated through the entry fee was further invested to fund the other ongoing social projects. Sports Minister Kiren Rijiju and former cricketer Gautam Gambhir endorsed the event and were the chief guests for this particular tournament.

Since the 2020 pandemic lockdown, Samvedna has successfully organized nine online tournaments, -and a summer Bootcamp – Online Shatranj Paathshaala (teaching the underprivileged), wherein over 70 kids have enrolled themselves.

Samvedna has trained over 250 underprivileged kids from the seven states across the country, and approximately 20 finest coaches from the country are also a part of the organization. It is affiliated with a few of the prominent NGO’s such as Sewa Bharti, Pratham & Katha, and has been receiving generous sponsorships such as chessboards, books, and other materials required by the students from the volunteers.

The entrepreneurial zeal of these young chess players is indeed applaudable. Samvedna is targeting to further expand its borders internationally as well, that encompasses almost 15 domestic states, and 5 international countries- intending to facilitate more than 1000 underprivileged kids. Post pandemic, an event that will consist of more than 500 participants might also be conducted.

“We also hope to devise an online method of teaching chess to the underprivileged so that they don’t miss out on learning chess while they are in their homes. Hoping that the situation heals, our annual event will be scheduled in December and we hope to make it Fide Rating this time,” said the duo.