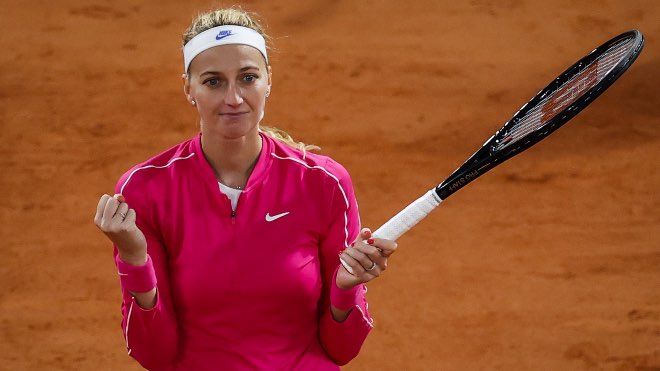 Czech Wimbledon champion Petra Kvitova astounded her fans after eight long years by advancing in the Roland Garros 2020 quarterfinals. Kvitova tennis diva suffered exponentially in her career due to an arm injury due to which she missed the previous year’s tournament.

“It’s been really difficult. It was a tough one for sure,” said Kvitova. She further added, “She served very well and played very aggressive. I’m really happy I managed to win even if I didn’t manage to serve it out at 5-2.”

“When the roof is closed it’s like being indoors and I really love to play,” stated Kvitova. Moreover, French Open 2020 will be crucial for the Czech icon to secure her position in the top 10 international rankings.

I have so many emotions going through my head, but for now I will just keep on fighting ? #couragebeliefpojd #RolandGarros pic.twitter.com/zHef2DiS1Y

The 30-year-old tennis icon smashed China’s Zhang Shuai with a score of 6-2, 6-4, and will soon be against the former US Open Women’s double winner Laura Siegemund.

Siegemund stated, “I didn’t get angry when things weren’t going my way,” during the initial trailing against the Badosa. She further added, “I think we were both kind of struggling but I think I kept it together better.”

The 32-year-old German tennis player Siegemund’s phenomenal win against the Spaniard Paula Badosa with a score of 7-5,6-2, has ensured her spot in the quarter-finals as well.