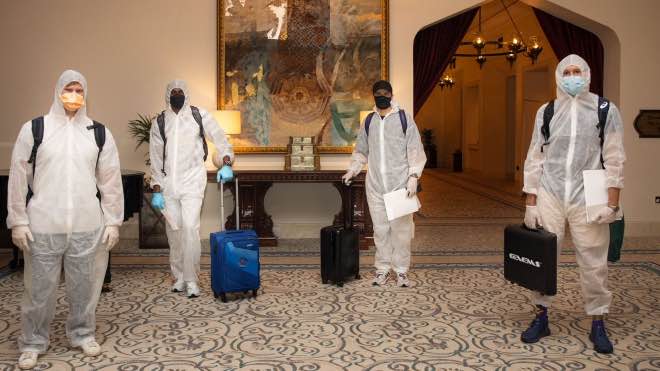 All 22 England and Australia players to be part of the 13th edition of Indian Premier League (IPL 2020) have reached UAE after completing white ball series in England.

All the players will undergo RT-PCR test for COVID-19 in Dubai airport and the three Kolkata Knight Riders players Eoin Morgan, Tom Banton and Pat Cummins will then proceed for Abu Dhabi, where their team is based.

All the Australian and English players who arrived in the UAE will undergo 36 hours of quarantine instead of the mandatory six days after the intervention from the BCCI president Sourav Ganguly.

“They have undergone one rapid test before boarding (the flight) and will undergo another on arrival. Otherwise, the robust testing protocols will be followed as usual. The rationale behind the move is that all the players are entering from one bio-bubble to another,” a senior BCCI official told PTI.

“The BCCI did a great job in reducing the quarantine period to 36 hours. This means teams like Chennai Super Kings (Josh Hazlewood and Tom Curran), Rajasthan Royals (Smith, Buttler, Archer) will have all their players available from their first game. Ditto for Kings XI Punjab that has Glenn Maxwell in its roster and Delhi Capitals that has Alex Carry,” a franchise official said.