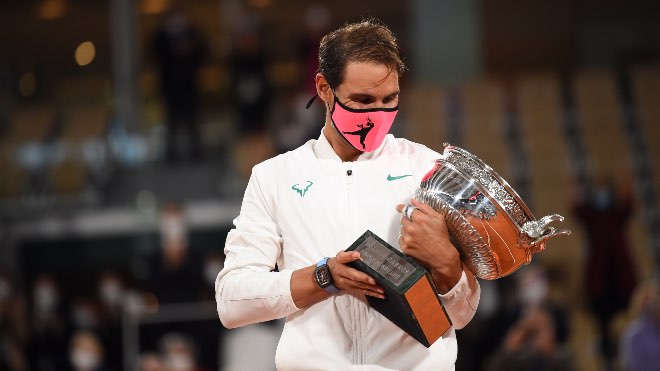 Tennis Icon Rafael Nadal created history with his recent impeccable win against the 33-year-old Serb Novak Djokovic, with a series of 6-0, 6-2,7-5 in the French Open 2020, furthermore, it was his 20th Grand Slam title that will be equaling to Roger Federer’s all-time men’s record.

The 34-year-old star has created history by winning his 100th match without a single defeat in the Roland Garros 2020.

How it started: How it’s going: @RafaelNadal #RolandGarros pic.twitter.com/6zfBuKADun

Rafael Nadal said, “Again, I want to congratulate Novak and his team on a great tournament. I feel privileged to share this rivalry and era with you. You won the Australian Open, Cincinnati, Rome, you’ve had another great season so congrats to you. As I said earlier, in a way, this doesn’t feel like a happy occasion because of the suffering around the world at the moment. But I’m sure we’ll all get through this. I hope to return next year with the crowd back in this beautiful stadium.”

Djokovic struggled to reciprocate the ferocious hits by Nadal and lost his rhythm to turn the table at his side during the first two sets. Although, the 33-year-old Serb gained momentum in the third set, unfortunately, he couldn’t smash the World No. 2 tennis maestro. Nearly, after two hours and thirty minutes of magnificent power-packed performance, Nadal was able to grasp the win by 7-5.