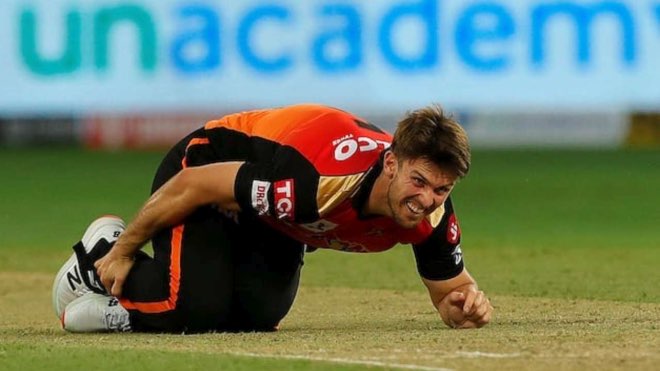 IPL 2020: SRH all-rounder Mitchell Marsh hobbles off the field due to ankle injury

Australian all-rounder Mitchell Marsh hobbles off the field due to ankle injury while bowling for his side Sunrisers Hyderabad against Royal Challengers Bangalore in IPL 2020.

Skipper David Warner gave him the ball for the fifth over. The 28-year old twisted his ankle on the follow-through of the fourth ball and then hobbles off the field. Fabien Allen replaced him as a substitute fielder. Vijay Shankar bowled the remaining two ball of the over.

Speaking about Mitchell Marsh injury, VVS Laxman said it looks bad. However, they were hopeful that they will come out to bat.

“The injury looks bad as of now. However, we are hopeful that he will come out to bat later in the day when required,” Laxman said in between the overs.

Mitchell Marsh latter came out to bat for Sunriers Hyderabad and was hobbling. Though he was not able to contribute to Sunrisers Hyderabad scoreboard and was out for a duck. He went for a slog against a slower full ball but fell backwards before limping awkwardly behind the stumps after hitting the ball. Marsh was helped off the field by physio.