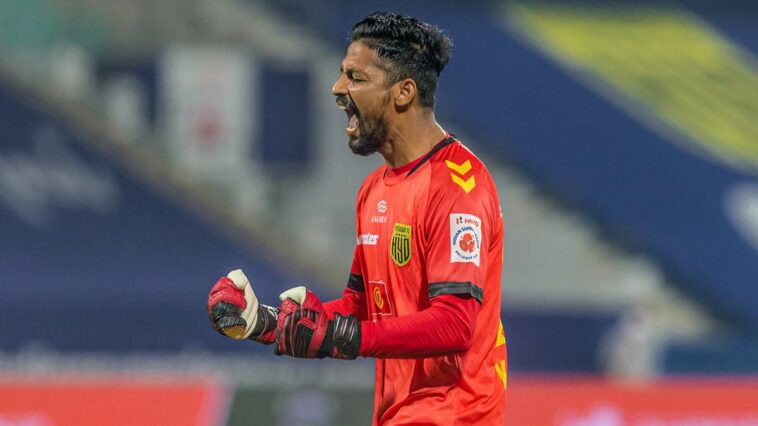 Ahead of the upcoming season of the Indian Super League (ISL 2022-23), Laxmikant Kattimani has signed a two-year contract extension with Hyderabad FC, the club announced on Friday.

The 33-year-old had a fairy tale ending to the recently concluded campaign, where he was also the Hero of the Match in the final. He was almost unbeatable in the penalty shoot-out that eventually won Hyderabad their first-ever trophy.

Kattimani saved four Blasters’ penalties, one of which had to be retaken, and stepped up right when the team needed him.

A two-time I-League winner, a Super Cup winner, and now an ISL Champion, Kattimani was a part of the Blue Tigers that recently secured qualification to the AFC Asian Cup 2023 and is one of the most experienced players in his role in the country.

He has 81 ISL appearances, 42 of them in Yellow and Black, where he registered 14 clean sheets (9 for HFC) and has always been a popular figure in his hometown.

“I am very happy to sign a new contract here and I am really grateful to the club for their trust in me. We have an incredible group here. We are one big family and I’m sure together we can achieve many more things,” said Kattimani after putting pen to paper with the Indian Super League Champions in a deal till the end of the 2023-24 season.

But long before, he established himself as a trusted custodian for Manolo Marquez. The Spanish coach preferred Kattimani, and the Goan believes that this trust is what made it easy for him to sign the new deal.

“Manolo is a coach that really believed in me since he arrived here at the club and gave me the opportunity and confidence to get back to my best. So definitely he played a big part in me continuing here at the club,” added the shot-stopper who earned a well-deserved call-up to the National team.

The city has already seen him play at the Gachibowli Stadium and Kattimani cannot wait to get back to playing in front of the home fans.

Speaking to the fans, he said, “We really missed you guys the past two years with the situation of Covid, but we felt your support on social media and I only ask you to continue their support from the stands this season and remind everyone how important you are to the team. You are an important part of the family!”