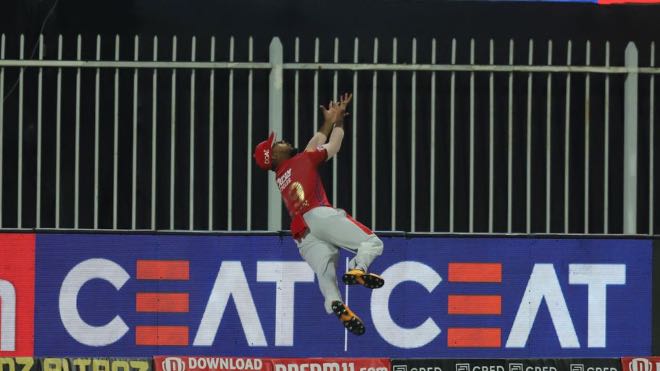 Watch: KXIP's Nicholas Pooran pulls off a stunning effort to save a six against RR: IPL 2020

Kings XI Punjab’s Nicholas Pooran pulled out a stunning effort to save a six against Rajasthan Royals in the match 9 of the 13th edition of Indian Premier League (IPL 2020).

Nicholas Pooran was fielding at deep mid-wicket during the eighth over bowled by Murugan Ashwin. Sanju Samson was on strike and hit the third ball over mid-wicket. But the Nicholas pulled off a stand to deny six to Samson.

Nicholas dived full length over the mid-wicket boundary and flicked the ball to Glenn Maxwell inside the boundary, while in airborne (milliseconds before falling) with his left hand. Kings XI Punjab fielding coach Jonty Rodes was seen applauding the effort.

Greatest Save in IPL History!!!!! pic.twitter.com/cTdRuFupfo