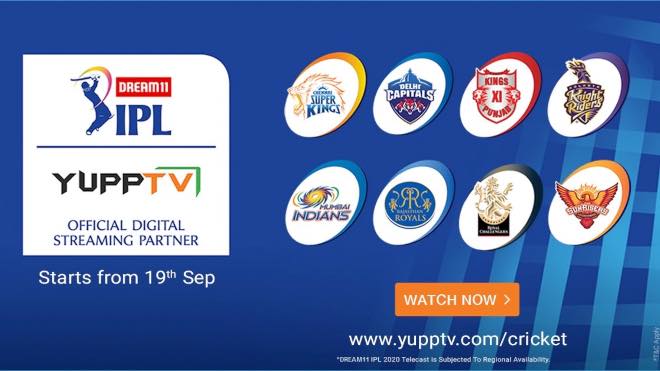 YuppTV has gained the digital Streaming Rights for the 13th season of Indian Premier League (IPL 2020) that is going to begin on the 19th of September. The tournament that will continue till 10th November 2020 can be streamed live on the YuppTV platform from Continental Europe (excluding UK and Ireland), Australia, South East Asia (excluding Singapore), South and Central America, Central Asia, and Sri Lanka.

IPL 2020 is finally beginning and cricket lovers all around the world are ecstatic. The tournament will begin on 19th September 2020 and will continue till 10th November 2020. It is being conducted in UAE this year instead of in India like every year. Three venues namely Sheikh Zayed Cricket Stadium, Abu Dhabi, Dubai International Cricket Stadium, Dubai, and Sharjah Cricket Stadium Sharjah have been selected for the event.

IPL 2020 comprises of 60 matches on the whole scheduled across 53 days in three different venues. The tournament follows a Double Round Robin and a Knockout format in which each team will play a match against the other twice. So far, Venues only for the leagues have been announced out of which Abu Dhabi will host 20 matches, Dubai 24, and Sharjah 12. The venues for the playoffs will be announced later.

All the matches of IPL 2020 can be watched live on YuppTV from the above-mentioned regions through Smart Televisions, Smartphones, Computers, Laptops, Tablets, and other internet-enabled devices.